GETTING THERE AND INFORMATION:

The Third World Assassins Boulder is in the main Breezy Point Bouldering area. Directly behind ( West) of The Love Knob. This boulder is easily identified as it sits by itself in the open meadow. There are three known problems on this block. All of which are worth doing if you are in the area.  To Access this boulder the easiest way is to head north down the drainage from Wrinkled Rock Campground and Parking Lot. You will encounter the Scuttle Butt Boulders at the opposite end of the valley as it descends. The Love Knob which is a rock formation holding sport climbs should come into view directly in front of you a little ways in the distance. Head towards this and when you get closer you will notice another valley to climbers right (behind the love knob) with a few warm up boulders. Third World Assassins sits slightly west in the valley by itself in the middle. If you were to keep hiking west you would encounter the Bus stop Boulder. 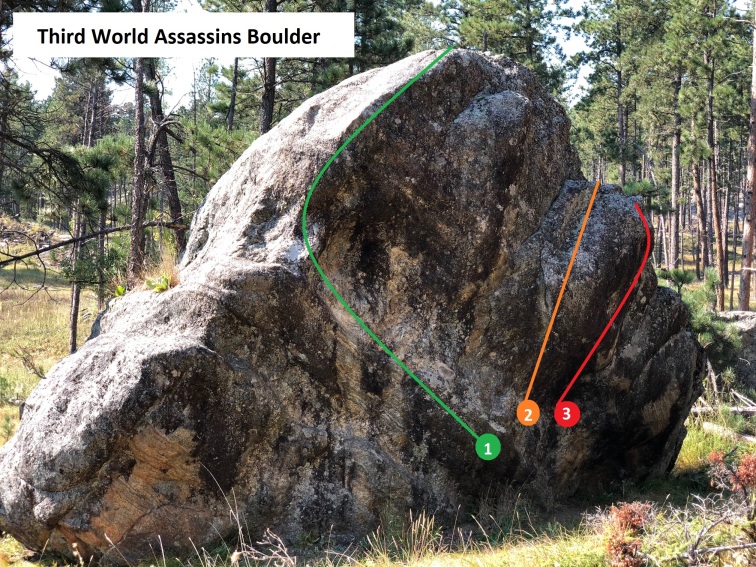 Orgininally climbed and graded V6 by Dan Dewell. This problem saw some traffic in 2016 and cleaned up nicely. For reasons unknown this problem is far from V6. It may even be easier than V4. Really fun movement. SDS and move up and left to the left arete. Follow up holds and then follow the half moon curve to the right. Slopers lead to the top out mantle.

Same start as the above route except you climb more out towards your right. Short powerful problem.